The Complete Works of Lewis Carroll 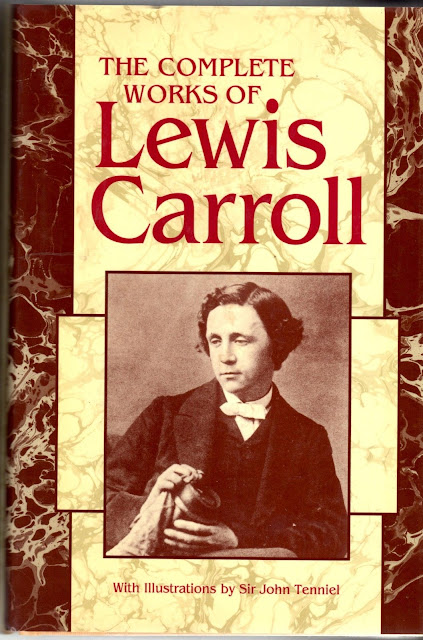 As I child, I was given the 'Alice' books in two separate editions, which I enjoyed reading many times, but unfortunately they have been lost over the years. Much later, as an adult in Oxfordshire, England, I replaced them with 'The Complete Works of Lewis Carroll', which of course included the unabridged 'Alice' books. Earlier this year, during the course of conversations on Facebook 'Messenger' with my USA friend Holly B. Strange, she mentioned to me the existence of 'An Easter Greeting to every child who loves 'Alice', a letter written by Lewis Carroll at Easter 1876. It began life as a four-page leaflet, which was inserted into 'The Hunting of the Snark', and the text was incorporated into the so-called 'People's Editions' of the 'Alice' books in 1867. I wish to acknowledge here my gratitude to Holly for telling me about this letter, of which I had never previously heard, and sending me an online link to a web page from where I could print it out.
I searched through my 'Complete Works', but could find no mention of the letter, which prompted me to buy the 1994 edition mentioned above. The bookseller's advert mentioned that it included several rare works which had never been seen since their original publication, so I hoped that I might find the letter there, but having searched thoroughly, I was disappointed. Strangely a friend here in England, who is close to me in age, clearly remembers seeing it in her 'Alice' books as a child, but unfortunately those books have been lost. I mention this because Holly and I both feel that no edition of 'Complete Works' is complete without the inclusion of this letter in its pages.
I felt both humbled and privileged when she invited me to write a review for her blog, but I said that while I was extremely keen on the project, it would be impossible for me to read the whole work, prepare and write a review, and get it to her before her deadline. I suggested a mini-review, and was more than happy when Holly expressed her delight at my suggestion. So I accepted the commission, and I sincerely hope my readers will enjoy the result.

Lewis Carroll is probably best known for the 'Alice' books, which are incorporated into this edition of 'Complete Works' in unabridged form, complete with the original illustrations by Sir John Tenniel. The 'Alice' books are fondly remembered by adults who enjoyed them as children, but Carroll's subsequent books, 'Sylvie and Bruno' and 'Sylvie and Bruno Concluded' may be lesser known. I first read them in my earlier edition of 'Complete Works' so I was interested to renew my acquaintance and refresh my memory. I remembered immediately that I had found some difficulty getting into them, at they are lengthy, and difficult to get one's head round, so plenty of time and patience is required of the reader, who would also be well advised to sit somewhere quiet and uninterrupted before embarking on the task. However, I found that persistence is rewarding, so I shall definitely read the books again.
The title characters are very tiny, cute and lovable fairy children who interact with humans and share many adventures. The stories are set in Victorian England, so there is a strong religious element running through them, where the humans engage in lengthy discussions about the possible reaction of God to various difficult personal decision-making situations in which they might find themselves. To me, as a non-academic, the conversations seem endlessly complex and involved, and can become rather tedious and obscure, which is a great pity, because it could be off-putting, and result in people putting the book down, never to touch it again. The lighter-hearted episodes in which the fairy children are the main characters are delightful, and very entertaining. Human children and adults of all ages would love them. As with the 'Alice' books, the stories are scattered with amusing little verses, most of them the nonsense poems for which Carroll is so well known.

'The Hunting of the Snark' is on p. 677. It is narrative verse written in a similar rhythm to the verses in the 'Alice' books. It also pays homage to 'Jabberwocky', which appears in 'Through The Looking Glass", borrowing such characters as the Jubjub Bird and the Bandersnatch. I had never before read this lengthy poem, and although the verses on the first two pages are amusing and enjoyable, as I progressed further I found it so complicated that I soon 'lost the plot' and got confused about who was who. We must remember that Carroll, whose real name was Charles Lutwidge Dodgson, was a brilliant Academic, both as a poet and as a mathematician. He wrote many poems and verses, including some extremely clever acrostics, which, for the uninitiated, are verses where the first letter of every line, when read from top to bottom, spells out the name or names of children he knew, including Alice Liddell, who was the 'Alice' of the books, and of various other children he had known. Being so clever, he sometimes used double or even triple acrostics, which are obviously very complicated and sometimes difficult to follow. He also wrote some verses that appear to be in Anglo-Saxon or Medieval English, and because some of the words are obscure there are footnotes explaining what they mean. Those verses are clever, not just because of the language in which they are written, but for their content. I thoroughly recommend them; they are educational as well as entertaining.

My attention was also caught by 'Early Verse', which begins on p. 700, because I was very much amused by the first little poem. I then glanced through the rest of that section. It seems to me that it is well worth reading, and I shall return to it when time permits.
I think it also worth mentioning 'Upon the Lonely Moor', on p. 727. It is an amusing and very readable set of verses, again in the rhythm style of 'Alice'. I am certain it would be enjoyed by anyone with a sense of fun.
I then turned to 'Phantasmagoria' on p. 741, and began to read Canto 1: The Trystyng. This another lengthy set of narrative verses when ends on p. 765. Again I have not had time to read all of it, but it tells the tale of a man who was sleeping in his bed when the resident 'house ghost' unexpectedly arrived, and they spent the whole night chatting and getting to know each other. The man became quite fond of the ghost, and was very upset when it disappeared in the morning. I am looking forward to eventually reading the whole story.
I also enjoyed a short verse on p. 768. With the title 'Ye Carpette Knyghte' is is amusing to read, and interesting because of the unusual spelling that Carroll frequently uses. It is very easy to understand what the poem is about.
Turning to p. 999, we find 'A Legend of Scotland'. Just six and half pages long, it is written in a strange form of English, with many unfamiliar spellings which could be off-putting, as making sense of them in order to understand the story would require time and concentration, but I think it should be interesting, so I shall definitely return to this for my own satisfaction at a later date.
Turning to p. 1009 we find an aptly named section called 'A Miscellany'. As I skimmed through it, in order to get a rough idea of the content, I noticed that most of the pieces contain bewildering problems to be solved: Algebra and symbolic Logic seem to be in abundance.
An article entitled 'A New Method of Evaluation' contains what, to me, appear to be many obscure mathematical calculations. There are also a number of seemingly ponderous discourses on subjects such as vivisection, followed by an article describing in great detail how to play various games, complete with an in-depth discussion on how to play them and the rules to be followed in so doing. Again there seems to be a mathematical theme throughout. There is also a lengthy article in which Carroll sets out to explain the dynamics of a partic-cle (sic).
The Vision of the Three T's is a lengthy work set out in three chapters, although it is written in the form of a play. Again, I intend eventually to study it properly, as at first glance it looked very interesting.

A wealth of poems and stories, among other things, is contained in this book, which can be dipped into again and again; I feel that there is something for everyone. My offering, which was a labour of love, is by no means a full review of 'The Complete Works of Lewis Carroll', but I hope it has given my readers something of interest to think about, and that they will be encouraged to read it, and thus to form their own opinions of its contents.

This post was written by Linda Roberts of Oxfordshire, England.

You can buy The Complete Works of Lewis Carroll here.

You can read An Easter Greeting to every child who loves Alice here.
Posted by Holly B. Strange at 7:55 AM