About the creator, in her own words:

I've always loved dollies, especially the creepy-cute kind!
I started making cloth dolls a few years ago
after reading Neil Gaiman's, 'The Graveyard Book'.
One day I was daydreaming about the little ghost children in the novel,
when I happened to glance over at a couple of Kokeshi dolls
I had bought when I visited Japan and was struck by inspiration.
I grabbed a notebook and began sketching cloth Kokeshi-style dolls with a spooky twist.

Unfortunately, I have more ideas than time when it comes to dolly making.
I'm currently working on some completely new doll designs,
but I'm such a finicky perfectionist that the process of creating
a pattern from my drawings is always a saga.
I tend to drive myself a little crazy trying to invent new ways of
making my ideas work three dimensionally.

A few of her creations: 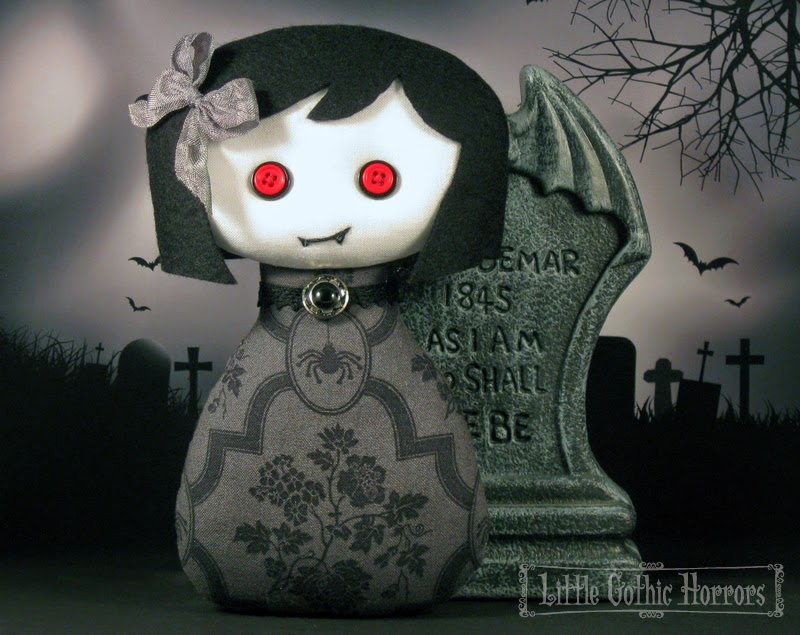 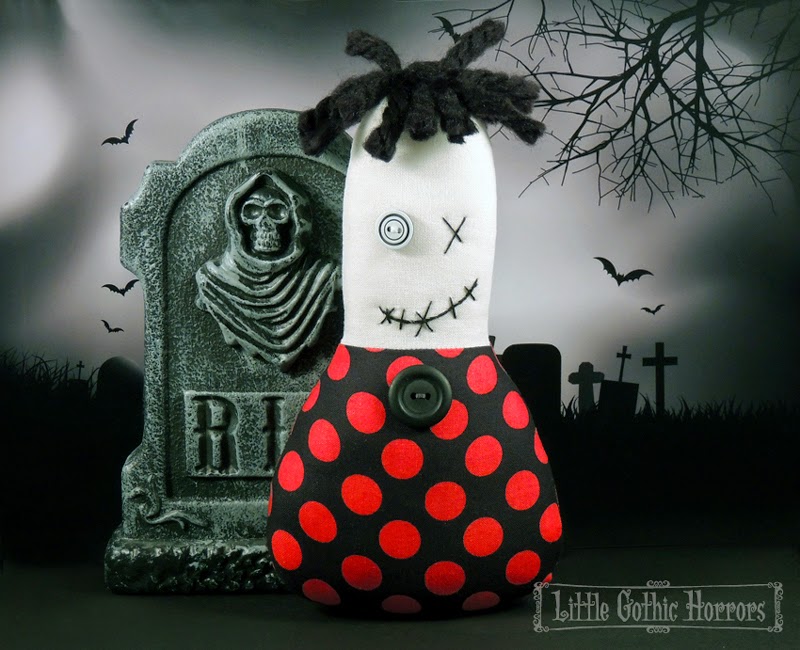 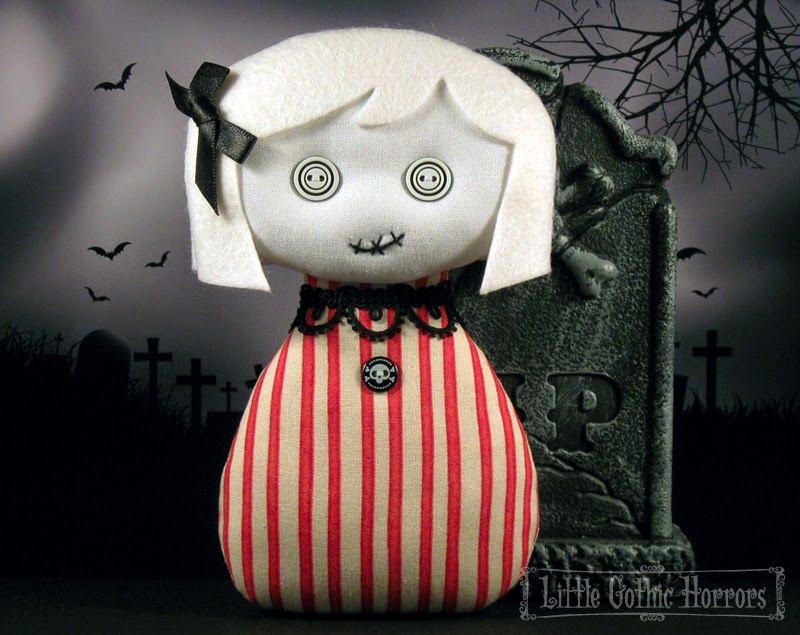 For more, visit her blog here.

Do you create creepy dolls too?
Find out how to get featured here.
Posted by Holly B. Strange at 5:01 AM 11 comments:

Until The Velvet Coffin is ready to be unleashed upon the world,
I'll be posting other Indie films and shows in the Viewing Room. 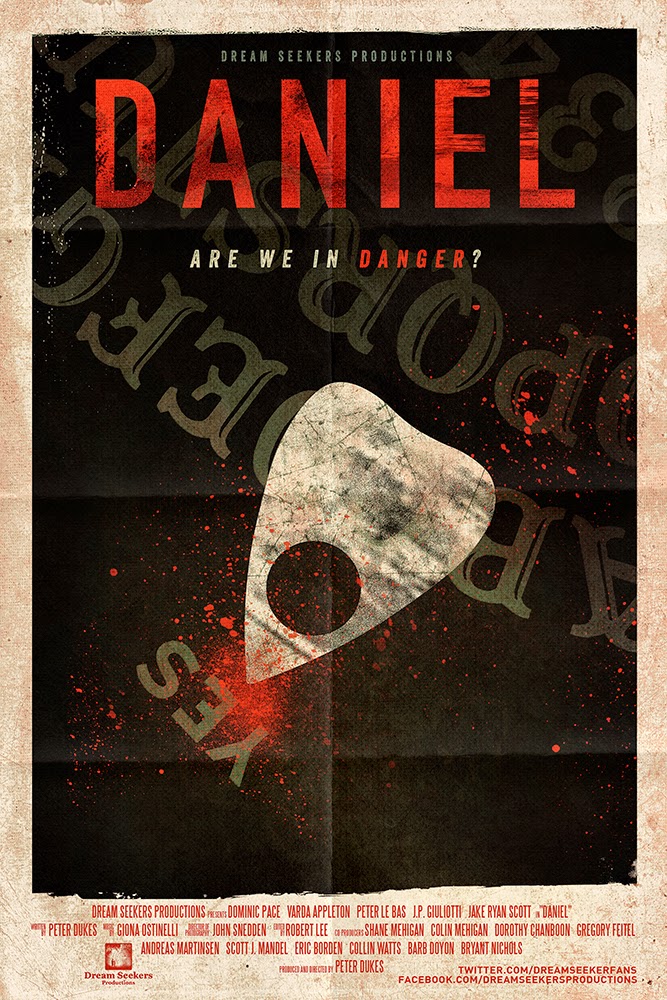 This is Producer/Director Peter Dukes' 15th film and one of his shortest.
A short and sweet 3 minute visual treat,
which he made as a challenge to himself.
"To tell a complete story in a minimal amount of time,
and allow the audience to draw from it what they will."
So that's what I'm going to let you do.
Go feast your eyes on it here!


In other news,
The Doll Days of Summer will begin soon! 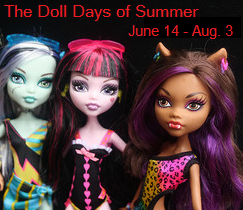 Doll Creators,
I'll be featuring your creations in The Lab too,
so find out how to submit yourselves here!
Posted by Holly B. Strange at 6:31 AM 4 comments:

Halloween Man vs. The Invisible Man

Before we dive into The Doll Days of Summer posts,
I must review this awesome new Halloween Man issue! 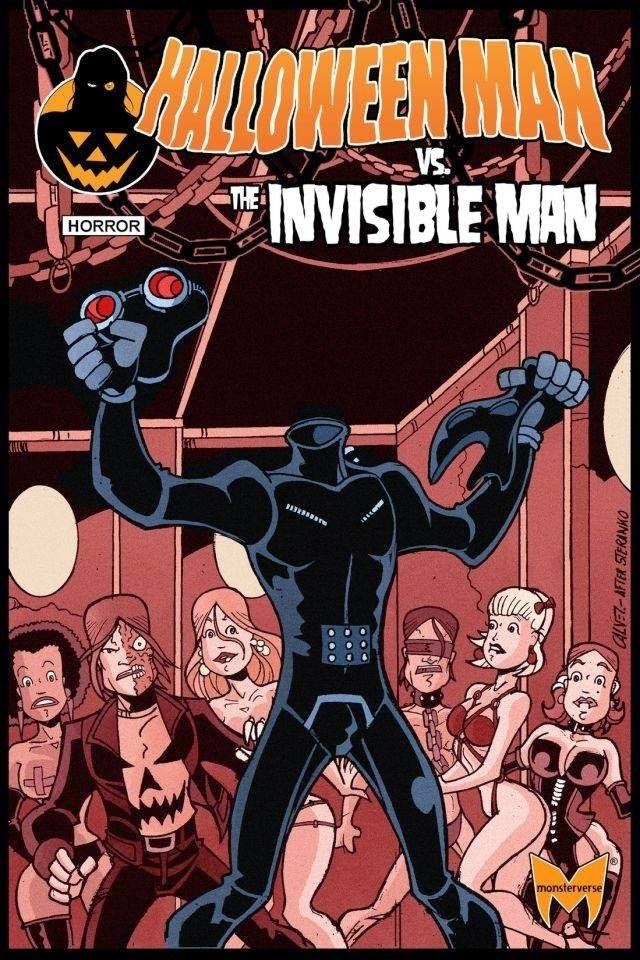 This comic is not for kiddies, since it concerns killings at a Fetish Club,
which is owned by Claudette Rains (a nod to the original Invisible Man.)
The police aren't doing anything, so she goes to Halloween Man for help. 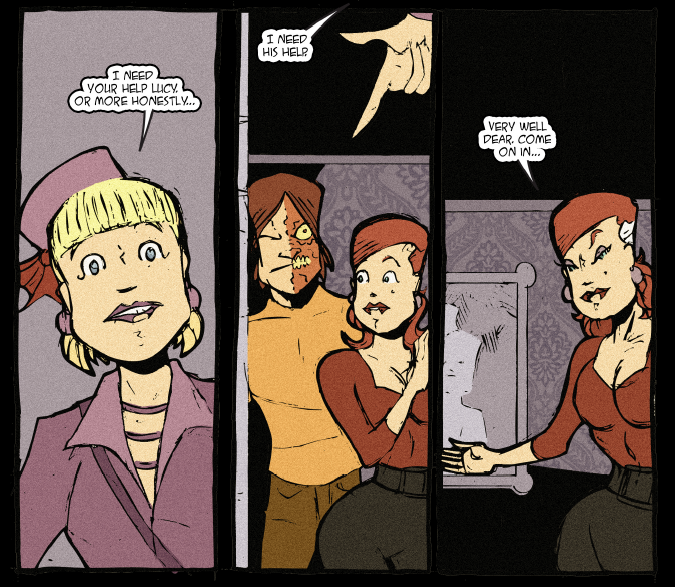 He agrees and sets out to put some terror into the killer known as The Terror.
That proves to be easier said than done though, as The Terror can't be seen!
But after stalking out the club several days, The Terror finally reveals himself. 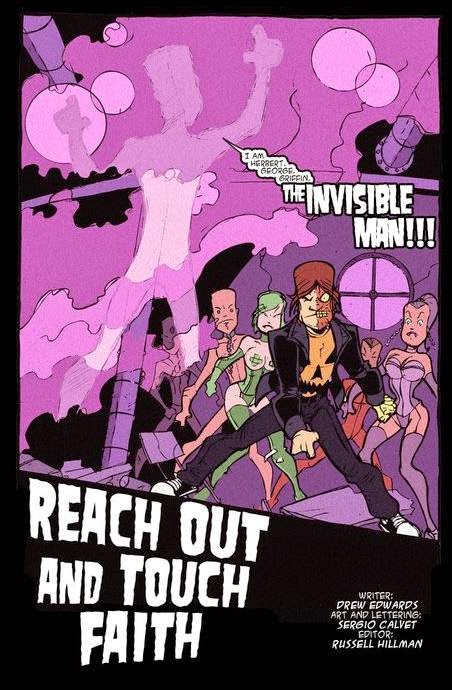 Then he escapes in a classic hearse, taking Claudette with him!
Halloween Man tracks them down to an old funeral parlor,
where The Terror is conducting diabolical experiments!
This run-in results in Halloween Man losing his head, literally! 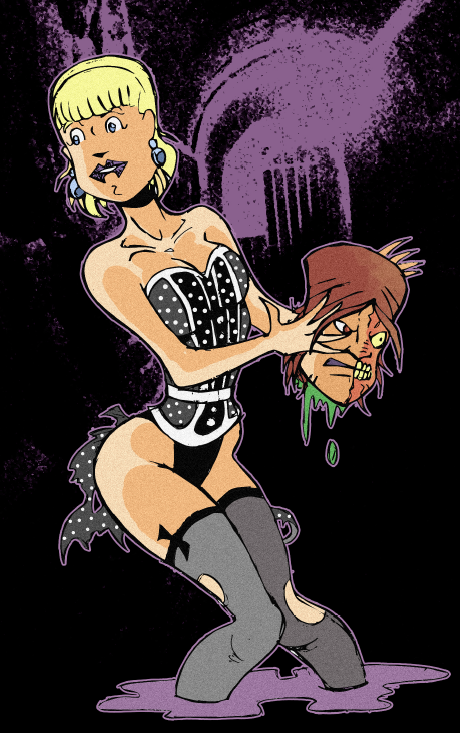 Can he pull himself together and put an end to The Terror?
You'll have to buy the book here and read it to see!

Why should you? Well to start with, it's 106 pages for just $1.99!
And there's background info at the beginning for first time readers.
Along with a forward by fellow comic creator Jason Henderson,
in which he describes HM as "a Halloween Treat that's good all year round."

That's so true. I love that HM is a flawed hero too, being a monster and all.

Monsters always pull at my heartstrings. The Terror/Invisible Man even did.
Some would consider it a gift, but like him, I think I'd go mad if I couldn't feel anything.
It reminded me of this line from the song End of the Dream by Evanescence:
"As much as it hurts, ain't it wonderful to feel?"
And that's what HM does, makes you feel.

P.S. Halloween Man: Eye of the Beholder is available now here too!
It deals with body image within the superhero genre and introduces the new Lucy! 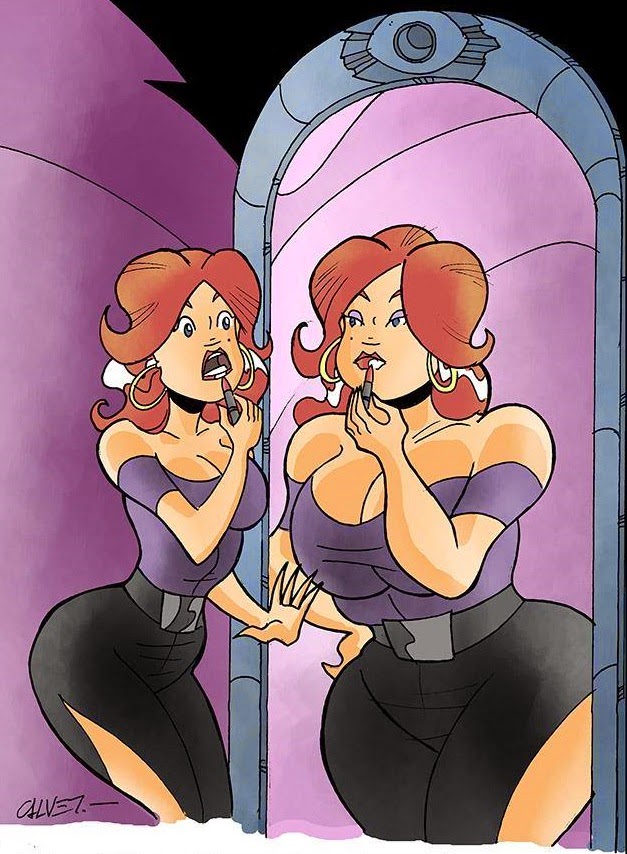 The Doll Days of Summer 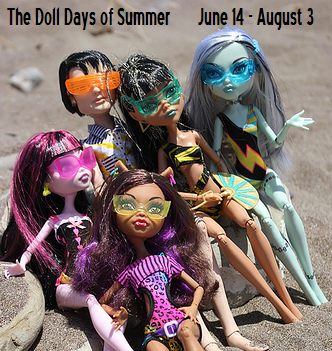 The Doll Days start today, which is World Doll Day
and will end on August 3, which is National Doll Day.

Here's what you'll see (besides dolls) during this time:

If you'd like to be featured,
please email the following to me:

- A bit about you and your dolls

- A link to your site and/or store


As The Doll Yearns

The soapy stories about my dark dollies,
which will take place in my new dollhouse! 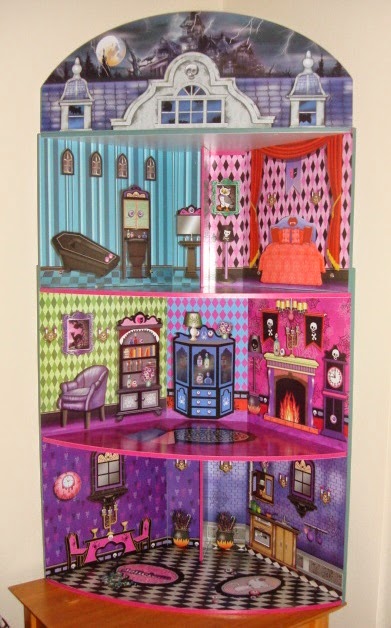 Celebrate the last Friday the 13th full moon for 35 years!

Don't stay out for long tonight though,
cause you might run into Werewolf Jason!


To play it safe, join this virtual party here
and watch some fitting flicks at home like me.

Also listening to moon-y tunes, including my favorite,
Wolf Like Me, which I must share along with a cover. 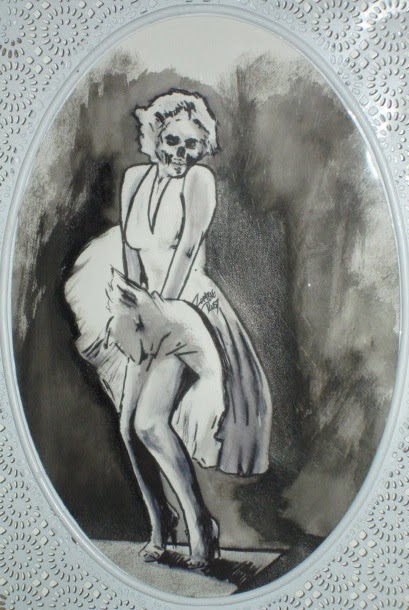 This undead artwork of her by Zombie Rust
fit in my makeup/jewelry organizer perfectly!

As you can see: 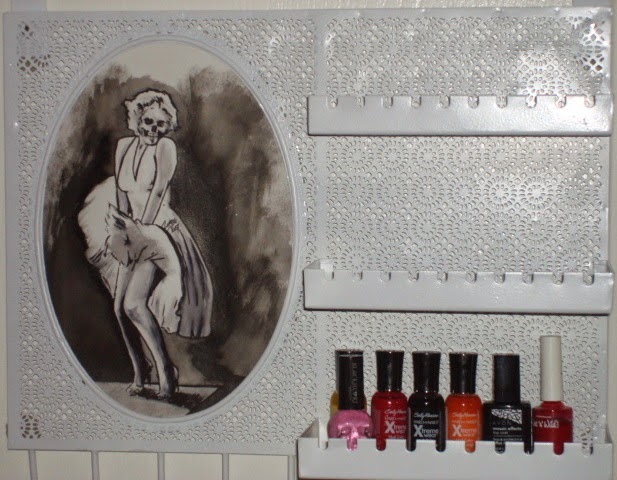 A mirror was originally in the frame,
but it cracked during shipping, sadly.
So I popped it out and put Marilyn in!

Here's the organizer all loaded up:

Many impersonators channel Marilyn's spirit,
but none as well or uniquely as Jami Deadly.
As you can see from these photos,
set to one of my favorite songs:

I was going to write about her show Deadly Cinema,
but the awesome Amy Asphodel beat me to it!
Check out her very informative post here. 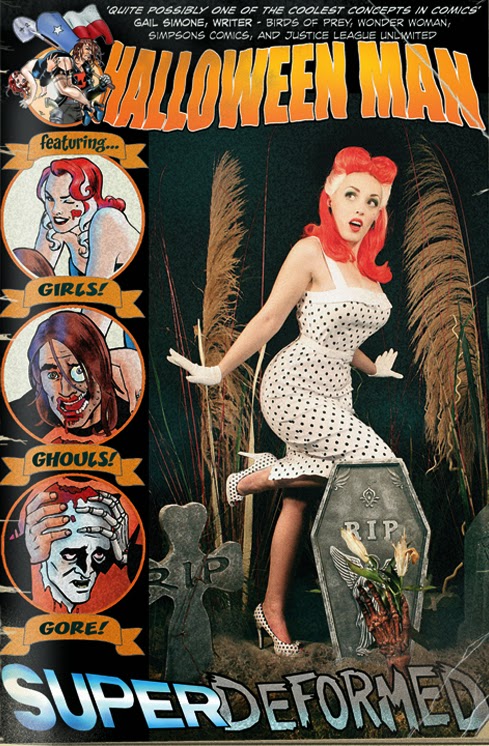 By the way,
Halloween Man vs. The Invisible Man is on Comixology now.
Go here to get the massive 106 page book for a measly $1.99! 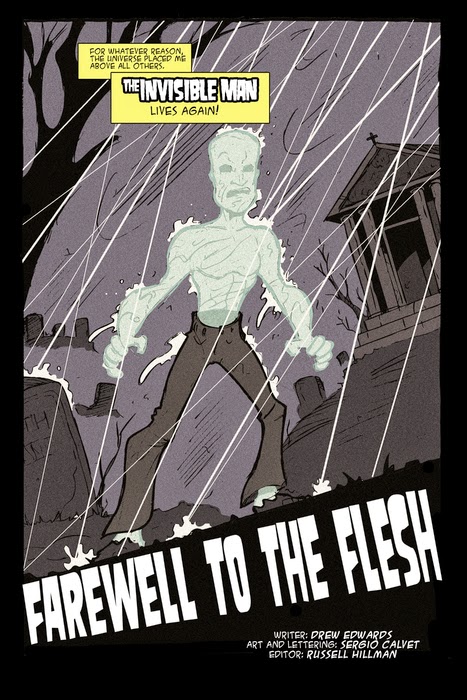 And hopefully she'll love me!

Lucy is the name I gave to this adorable dolly,
whom I won from Emma of Little Gothic Horrors: 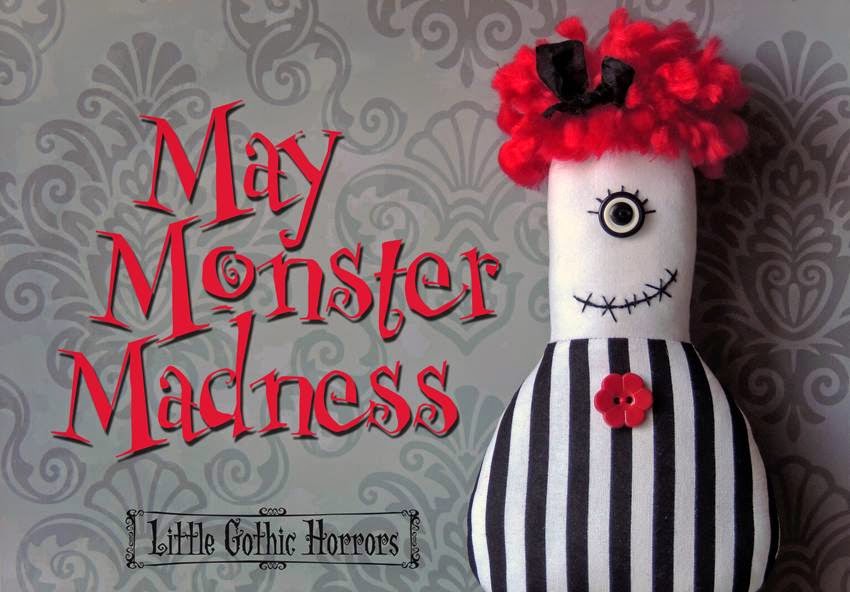 She's the second doll I've won from Emma actually!
(Yes, I am a lucky ducky!)
I can't wait to take/post photos of the two together!

I just hope Nurse Payne doesn't get jealous of Lucy.
Since she's long been the top redhead of Horrorland. 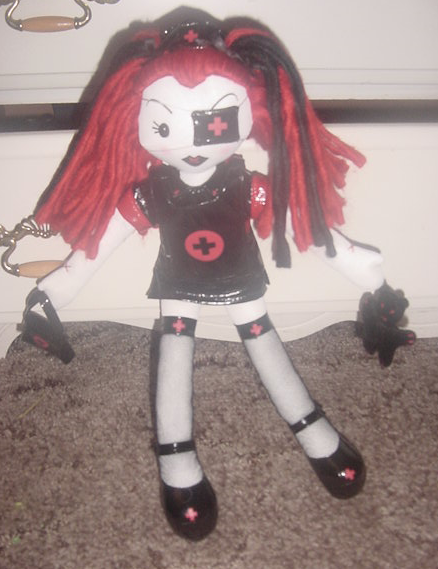 She's not the top nurse here though.
Oh no. Nurse Chika calls the shots!

Those are just a few of my red and black toys.
It's definitely my favorite color combo,
so I had to join this celebration:

Magaly Guerrero has inspired me to write stories about my toys too!

They'll be posted monthly, in a soap opera format.
And little Lucy will be the star,
so I'll call it As The Doll Yearns!
(Since I plan for her to pine for her sister's zomboyfriend.)
Unless I (or one of you?) can come up with another name.
Posted by Holly B. Strange at 7:15 AM 10 comments:

Thank you to all who commented on my MMM Tea Party post!
While gathering photos for it, I stumbled on this article:

Of course I know and love Lon,
but who's this Evilum or Evilun?

I had to find out, so I searched.
Here's what I dug up:

Here's what a fan had to say about her:

"Evilun was portrayed by a very talented local actress named Ruth Sprayberry.
She was active in the community theaters of Shreveport,
and was a very kind and gracious person.

I watched Terror! every weekend during junior high.
The movies were usually not awful, but weren't the best either --
films like "I Bury the Living" and "Cry of the Wolf".
Evilun had a small creepy set with lots of dry ice fog and candles in ornate candelabras.
She had a very direct, unnerving presence, made the usual wisecracks,
and seemed to be having a grand time with it all.

The Terror! program ran a few years.
Many years later -- in the mid '70s --
I worked at the same TV station as Graphics Director.
Going though old files, I discovered a few great publicity photos of Evilun,
and a few with Lon Chaney.
I found articles and notices about the "Design A Monster" art contest as well.
Perhaps that stuff is still stored away in their archives,
though the station has had several owners since.
It might be fun to try and track some of that down."

Someone did track those down and posted them online,
so I'm going to share them!

And lastly, my favorite, her promotional card:

Thanks to @WTHuston on Twitter for sharing this photo: