Such as in the Alfred Hitchcock Presents episode "Lamb To The Slaughter."

In which a housewife bashes her husband's head in with a frozen leg of lamb!
Like so:

She, Mary, who's superbly portrayed by Barbara Bel Geddes, is so sweet.
The police don't suspect a thing when she serves them the murder weapon. 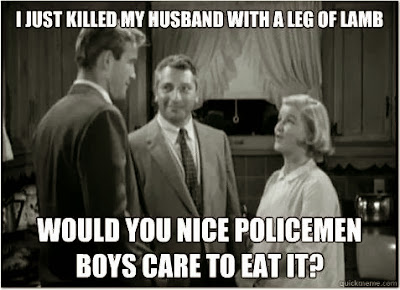 While eating it and discussing where the weapon could be,
the lieutenant says the following:
"For all we know, it might be right under our very noses."

The episode ends with Mary giggling to herself in the other room.

Never had I seen food being used as a weapon,
other than when it contained Hitch's staple, poison.
So when I saw this as a child, it blew my little mind!
It terrified me, which is why I chose to write about it.

You can read the story, which was written by Roald Dahl, here.

A more recent example of fighting with food is in "Trick 'r Treat."
(Which is playing all day today on FEARnet and also On Demand.)
The Spirit of Halloween aka Sam's weapon of choice is a lollipop. 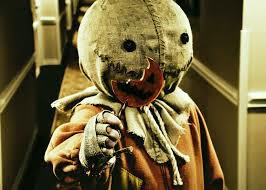 Thanks to FEARnet, I'm now the proud owner of a replica of it!
You can enter to win some goodies of your own from them here.

Back to Hitchcock and food.
Here's how to make Quiche Lorraine using his recipe:

Perhaps they're fighting over whose recipe is best here? 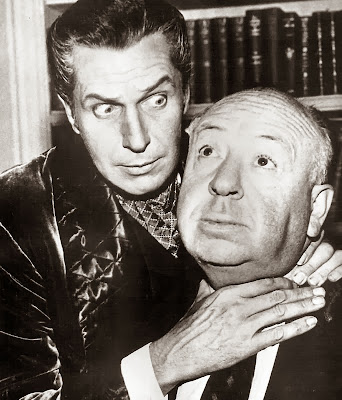 Actually this was taken during his appearance on AHP.
You can watch the episode "The Perfect Crime" here.

Want more Hitch? Of course you do!
Tune into the AHP marathon on Antenna TV
and hop on over to Backlots' blogathon here! 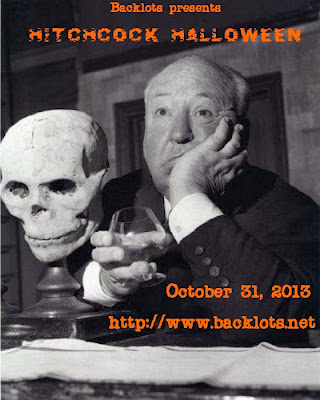 Happy Halloween!
Posted by Holly B. Strange at 8:50 PM 14 comments:

Sometimes it can be challenging to come up with great, fresh,
and relevant Halloween costumes for those of us with facial hair. We know!
Who wants to shave off their hard-earned beard
or impeccable mustache just for a holiday that, naturally, only comes once a year?
There are of course the classics: the caveman, the wizard,
Paul Bunyan, and Abraham Lincoln, to name a few.
However, there are many more contemporary options for 2013!
Let us look to the films of the year for inspiration.

1. E. Aster Bunnymund from Rise of the Guardians (2013)
Bunnymund is a great costume for those with silver gray or white facial hair.
He would also be a good choice for someone with a little creativity
who would like to make his own props.
For Bunnymund, you will need a boomerang, thin rope to wrap around your ankles,
a strip of leather or synthetic leather for a sash, a pair of gauntlets, any pair of shorts,
and of course a set of rabbit ears and a tail.
If you want to go the extra mile,
use blue face paint to create the arm markings as tattoos.
(You could also be Santa Claus from RotG,
but some people might think you're dressed for the wrong holiday!
For best results, do that one with a RotG group.)

2. James P. "Sulley" Sullivan from Monsters, Inc. (2001) and Monsters University (2013)
Sulley is a fun costume for those who aren't afraid of some temporary color!
Use a light blue spray color on your head and facial hair
and comb through it after letting it dry.
Another great option to consider for the most realistic appearance is hair chalk.
For Sulley, you will also need a pair of horns and, if desired,
a set of black claw stick-on nails. They pull right off at the end of the night.
Use face paint or eyeliner to draw on Sulley's dog-like nose.
Wear any light blue and purple clothing, and you're set!
To really make an impression, get blue faux fur "monster" slippers.

3. King Fergus AKA Merida's father from Brave (2012)
Fergus is a Scottish king with a trimmed beard
and a mustache that feathers across the full width of his face.
Besides the facial hair, to keep this costume simple, all you need is a kilt, a furry cape,
and a prop sword with a wide cross-guard
(the thing at the top of the hilt that prevents your hands from sliding onto the blade).
The King has one wooden leg, so be creative with that aspect of the design if you choose.
If you have a daughter, let her be Merida alongside you for Trick-or-Treat,
or ask your wife or girlfriend to be Queen Elinor.

4. Stoick the Vast AKA Hiccup's father from How to Train Your Dragon (2010)
with a sequel in 2014 and Dragons: Riders of Berk (2012)
Stoick is a Norse-style chieftain with a massive,
partially braided beard and a wide mustache.
His key design features are (once again) a furry cape, a wide belt,
studded gauntlets, and of course, a horned Viking helmet.
He is a good option for those with large, full beards.
If you have a son or perhaps a beardless best friend, ask them to join you as Hiccup.

5. Logan "Wolverine" from the X-Men series and The Wolverine (2013)
Wolverine is not a costume for the faint of heart, if you want to be truly accurate!
That said, he is a classic character, and his costume is widely available for purchase
from a variety of costume and Halloween shops.
Alternatively, just buy or make the claws
and go with his jeans and wifebeater street clothes!
For the updated Logan as played by Hugh Jackman, the key feature is, of course,
his well-shaped and angular facial hair. Logan's style of beard is called "muttonchops".
This style is essentially extended sideburns connecting to a mustache,
with the chin and neck shaven.
The key to Logan's muttonchops is the angularity and short length.
Use a motorized trimmer to shape and trim the facial hair.
Go to a barber shop for the best results.
If you are not wearing the Wolverine mask, then don't forget to use hair gel
to style the sides of your hair upwards into the iconic sharp silhouette.

If you have a favorite character from this year's movies,
they would be a great choice for you to create this season.
Team up with your close friends and family and put together group costumes;
you could make a great impression at a party with the full cast of your film!
Don't be afraid to make your own costume or props, and use whatever you have on hand.
As with any good Halloween costume, use your imagination!

This guest post was written by Chicago cosplay queen Crystal Isis.
Posted by Holly B. Strange at 4:37 PM 6 comments: 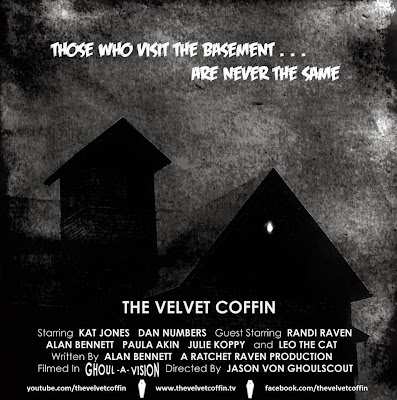 I'm proud to announce I've been appointed Publicist for this upcoming web-TV show!

I've also been sharing a horror hostess every weekend on our Facebook page.
Starting with Maila Nurmi (Vampira) of course. I did a trivia game about her.
Here's one question I didn't ask though.

What film does she read a beat poem in?

The answer is The Beat Generation (1959)
And here's the scene:
Yep, that's Jackie Coogan (Uncle Fester) in there too!

Anyway, for more info on The Velvet Coffin,
please email me at thevelvetcoffin@gmail.com
Posted by Holly B. Strange at 12:45 PM 4 comments:

Feast Of The Possessed 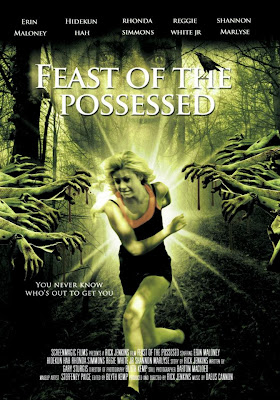 This is the second in a series of five short horror films by ScreenMagic Films,
which will be released individually then put together to make a full length film.

You can read my review of the first film, The Devil Is My Witness, here.

I enjoyed this one even more, cause there was more character development.
Rhonda Simmons reprises her role as the delightful Devil. 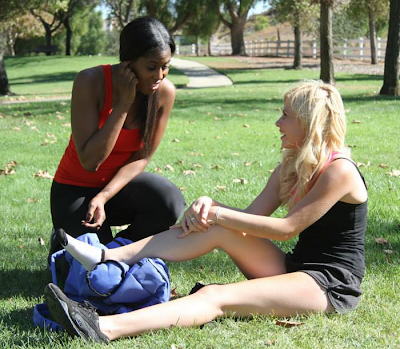 Here the Devil is with the Damsel In Distress, Erin Maloney

As you can see, she's injured her foot
and is waiting for her husband/gymnastic coach,
who went to get some ice.

He never returns though.
So she goes looking for him and finds him dead in the park bathroom! 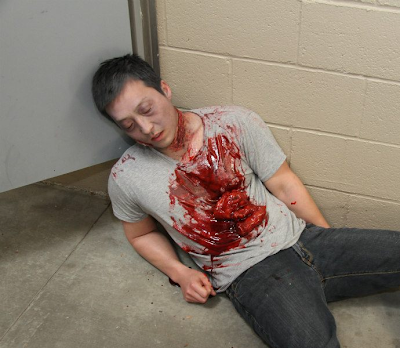 Who or what killed him?
The cute couple with eyes only for each other she saw earlier.
And now they have their eyes on her! 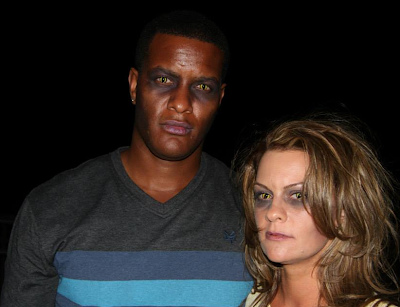 Then comes the mad dash for her life.
Does she escape or become dinner?
Find out here!

Also check out interviews with the great cast and creators here.
Posted by Holly B. Strange at 4:00 PM 1 comment: