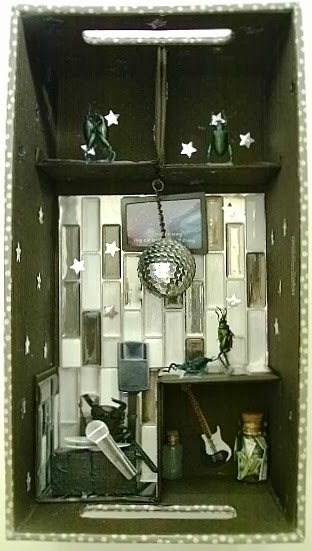 Insects in the Club

This little scene showcases “Beats” the Stag Beatle (Odontolabis dalmanni intermedia)
behind the DJ booth providing hours of entertainment to the rest of insect-kind,
in a very unique club where all insects are allowed (for a small fee of course).
The club tonight happens to have five Sagra femoralis insects enjoying themselves.
A couple (Niv and Nats) dances in the couples room romantically,
while Georgia dances all by herself, just the way she likes it.
But then we have “Breaky” spinning on the floor with some break dancing of his own,
while “Saggy” stands and watches just at the edge of the spotlight.
Hopefully some more bugs will be joining soon! 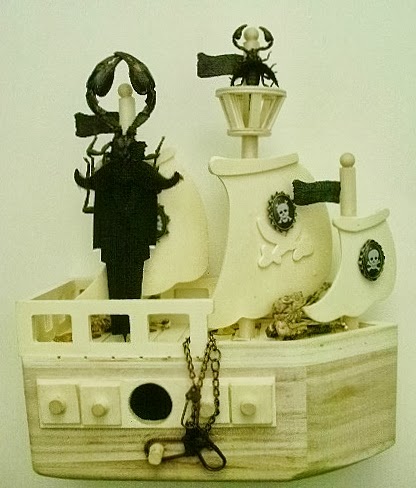 You’d best be on the look-out for the one-eyed pirate Billy (A Heterometrus scorpion)!
Ever since he liberated a human ship from the throes of a dangerous tide
he’s been sailing and plundering all that he comes across.
He’s gotten quite the name for himself too,
since his ship is rumored to contain human bones
and remains from as far back as the 3rd century BC!
Eventually he even acquired a first mate, Jilly,
who vigilantly keeps watch from the crow’s nest, so they are ready to rob on the go.
Now if only they had a bit more powerful toxin with their stings,
then they might be able to better defend their bounties from being stolen as well! 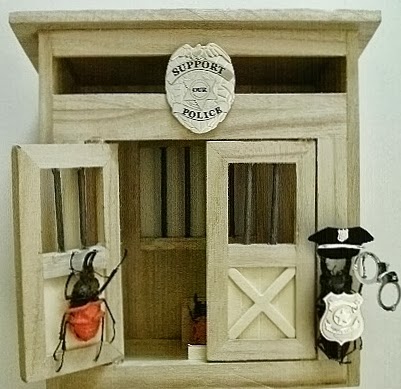 Sometimes even bugs are criminals,
and that is no exception for “Crunch” (A Sphaenognathus Monguilloniand beetle).
He’s been a trouble-maker from a young age,
but most recently has resorted to assault on some poor insects smaller than him.
Of course insect society does not condone any violence like this,
so he’s been thrown in jail, awaiting his verdict
and to see whether the two poor insects he assaulted will even make it through.
However Crunch doesn’t want to stay in prison
and he’s worked on a plan to escape without even telling his bunk mate!
Unfortunately his kick the door in and run strategy wasn’t the most brilliant,
and Police Officer Jenny (An Aegus Acuminatus) was waiting for him!
Can he escape in time? 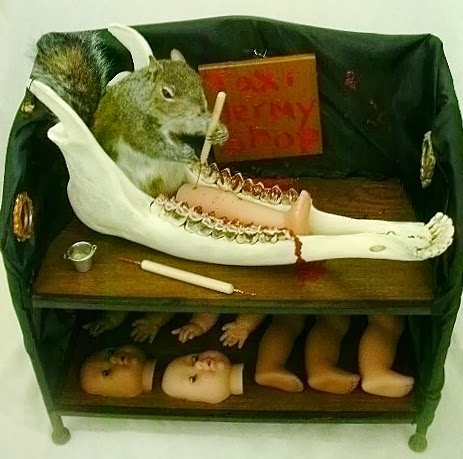 Twisty is a squirrel after my own heart,
with all the twisted and unusual things he likes to do, and hobbies he has.
Twisty actually practices taxidermy and even has his own shop just outside his tree home,
along with a variety of pieces on display around it.
And he doesn’t practice any kind of taxidermy; humans are his specialty.
Before you, is his shop, where he does all his taxidermy work.
He actually uses a jaw bone from an Elk as his flesher and fleshing beam,
though it is a pain to clean sometimes.
He also has a bucket of acidic solution for a replacement on tanning and drying,
which leaves the human flesh shrunken.
The process seems to work well for him since he even has some back up body parts
for sewing together later once he’s removed all the necessary bone elements.
If this is surprising, just imagine what other practices Twisty is involved in!

Erika Henrike is a professional collector and creator of oddities for OneShotVariety.com,
who loves talking about fashion, stuffed animals, and her insect dioramas.
She is fond of the more odd and unusual knick knacks in the world
and likes writing about them to share her interests with others.
Posted by Holly B. Strange at 2:00 AM