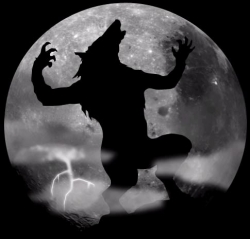 Happening every remaining weekend in Sept.
Since the Harvest Moon occurs this month (the 29th to be exact),
it seemed like the perfect time for some lycanthrope love posts!

And to kick it off, I'm proud to present THE BEAST,
followed by a conversation with the film's creator:


Q & A with Peter Dukes of Dream Seekers Productions 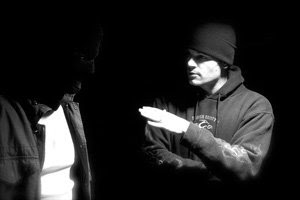 Could you tell us about the making of the film?

The first thing I did was go out and cast Bill Oberst, Jr,
who's the current "it" guy in indie horror.
I'd seen his work on an old history channel show called "Sherman's March",
or something to that effect, and I knew he was the guy I was looking for.
I invited him in for an audition, and two lines into the reading, I knew the part was his.
I got lucky because he was just blowing up at that time,
and I think I picked him up at the right time.
If I'd had to delay production a year, I doubt I could get him now!
At any rate, he did a fabulous job in the film, and aside from being a great actor,
he was a total pro on set.  He was fully prepared, focused and cooperative, at all times. Period. That can be tough on a small indie set like mine,
where we're shooting fast and things can get a little hectic.
I appreciated that a lot. For that matter, I appreciated everyone.
The rest of the cast, Peter and Alexander Le Bas were great to work with,
and also talented actors. John Snedden, my DP,
and the rest of the crew were like dog soldiers,
just working their way through the sheer madness of taking on a film like this,
with its production needs, and shooting it ALL in one night. Insane.
That took a lot out of me, and without everyone's support
I wouldn't have made it through in one piece. :)
This film received more press than we've gotten on any other film before,
and was certainly a deciding factor in us deciding it was time to take it to the next level,
which we'll be doing with our next film CAGED.
We love what we do, we're good at it,
we've cut our teeth on 14 films and now it's just time.
Time to move up or move out. :)


You definitely made the right choice casting Bill Oberst, Jr. as the father.
Could you tell us a bit about CAGED?

It's about a mentally disturbed man who believes that a killer lives with him.
In the vein of X-FILES, TWILIGHT ZONE and perhaps a little TALES FROM THE CRYPT.
We're aiming for superb name talent and locking in outside investors.
We intend for it to be our statement film. Our "we have arrived" film, if you will.
I have to be discreet I'm afraid with who's attached,
until the lead role is officially cast at least,
but let us just say it's AMAZING what actor is reading the script right now.
Uber talented, well known and respected in the industry, and for many many years now.
Has done big roles in big films.

Love the sound of the film and can't wait to see who the lead actor will be!
Let's get back to THE BEAST though.
Were you inspired by another werewolf film(s)?

I'm a fan of many genres, but certainly have a soft spot for horror,
and I really wanted to take on a monster picture.
A classic monster picture to be exact.
Something as an ode to the classic Universal films of yesterday.
There are many classic monsters to choose from, of course,
but I settled on the one that I feel has kind of been the unwanted stepchild of the genre.
Werewolves have never really received as much mass attention and love from the
community as other creatures, such as vampires and zombies, the current "it" monsters.
Of course I was also leaning towards the werewolf from an early standpoint
because the idea of holding a beast at bay, deep inside you,
is something that I feel resonates with a lot of people, in various ways,
and I felt it appropriate to the story I was looking to tell,
so it all just kind of fell into place.

I agree, werewolves don't get enough love.
Lastly, just because I'm curious,
what would you do if you were in the father's shoes?


That's a tough one.
Who can really know until they actually face such a situation in real life, right?
I'd like to say I'd have the strength to do what's right,
and I won't explain what I mean by that until people have a chance to see the film,
but as a father in real life, I cannot comprehend facing such a difficult choice
and I hope (KNOCK ON WOOD) I'll never have to!

So do I!
Thanks for sharing with us, Peter.

Learn more about Dream Seekers Productions at their website here.
Posted by Holly B. Strange at 5:55 PM